Surviving the Reich: The World War II Saga of a Jewish-American GI

Voyage of the St. Louis

Surviving the Reich: The World War II Saga of a Jewish-American GI by Ivan Goldstein

For the Fatherland. Ilsa Fanchin. Courage Born of Faith. Edward Boersma. Memoirs of a Girl from Berlin. Susanne Lang. Trust and Betrayal. Life Between Two Worlds Horst Uhse. My Memories of Berlin. Herbert R. The Past Is Always Present.

This is by no means a comprehensive list. The number of World War II books available is vast. 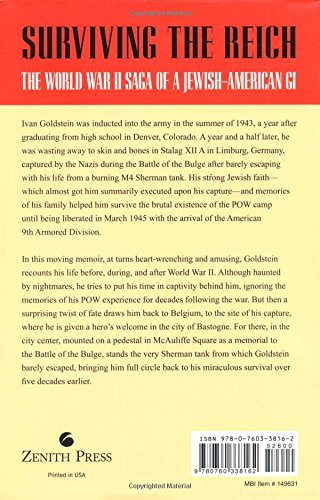 People love to read about one of the worst events in history. In a way, this makes no sense—the list below makes for some depressing reading. But in another way, the list contains reading that is compelling and essential: we need to know our history now, if ever. Michael Davies is prepping to go to Pearl Harbor.

Merope Ward is coping with a bunch of bratty evacuees and trying to talk her thesis adviser into letting her go to VE-Day. But their targets travel in well-guarded convoys. When contact finally occurs, the hunter quickly becomes the hunted.

Surviving the Reich: The World War II Saga of a Jewish-American GI by Ivan L. Goldstein

When their dark secrets are exposed and the invisible thread of fate binds them even tighter, they find the strength and resilience to reach for their dreams. But after the Japanese attack Pearl Harbor, paranoia and suspicion threaten to destroy their lives, and a shocking act of betrayal changes everything.


Instead of being executed, Lev and Kolya are given a shot at saving their own lives by complying with an outrageous directive. They braved some of the heaviest fighting of the war…yet their story remained classified for more than twenty years. Full-scale attacks had been driven back. Now they were sending in just five men, each one a specialist in dealing death. Hieronymous Falk, a rising star on the cabaret scene, was arrested in a cafe and never heard from again. He was twenty years old. He was a German citizen. And he was black.

Beyond the prison walls, the war rages. Inside, a man is found brutally murdered. What follows is a searing portrait of Korea before their civil war, and a testimony to the redemptive power of poetry. Maximilien Aue has reinvented himself, many years after the war, as a middle-class family man and factory owner in France…Through the eyes of this cultivated yet monstrous man we experience in disturbingly precise detail the horrors of the Second World War and the Nazi genocide of the Jews.